Cuisine: The cuisine of London has been strongly influenced by the cultures of Eastern and Continental Europe but if you are looking for a typical dish, don’t forget to pick up some meat and vegetable patties and some Yorkshire pudding. 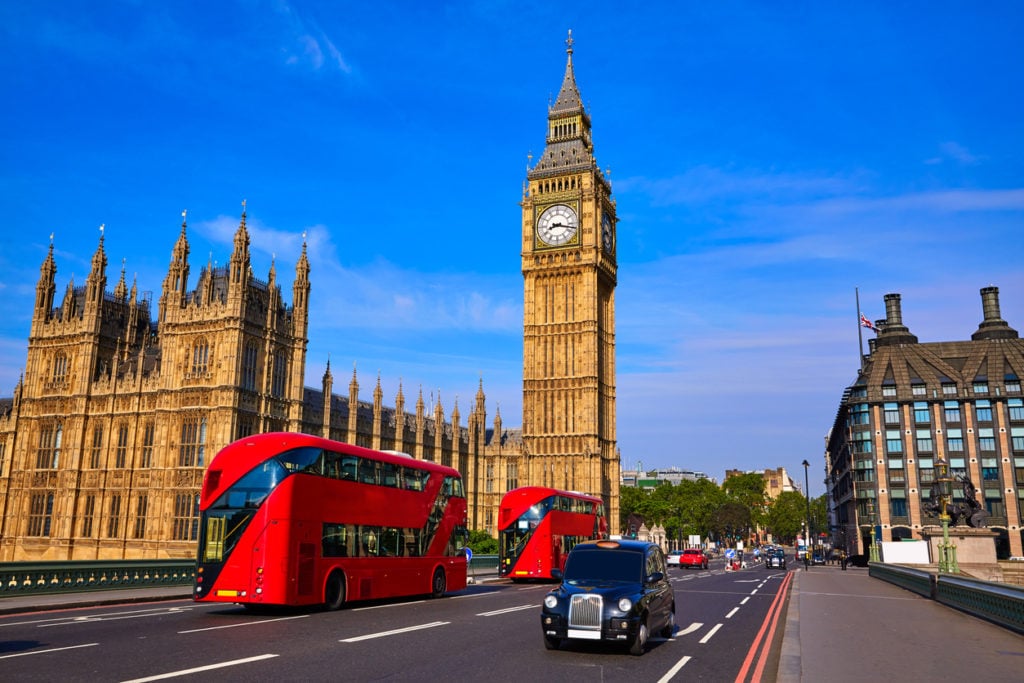 Recommended Books: Many great authors, like J.K. Rowling, have written books set in the city of London. The Harry Potter fantasy book series will keep you busy and entertained. For a non-fiction book, pick up Peter Ackroyd’s London the Biography.

Packing Tips: Since London weather is so unpredictable, it’s always a smart idea to pack an umbrella and a pair of rain boots. You might also want to pack a plug adapter if you plan to travel with any electronics.

Ground Transportation: Grab a black taxi, also known as a hackney carriage, to travel within London. Or experience one of the world’s largest bus network and board one of London’s red double-decker bus.

Best Travel Dates: Although it’s difficult to predict London weather, one can argue that the summer time (July and August) is the best time to travel to London.

Airports:  Listed below are some of the airports in or near London:

London Heathrow Airport: Heathrow is one of the most congested airports in the world for commercial flights. Priority One Jets does not suggest landing or departing from Heathrow in order to avoid delays caused by the commercial traffic. Private jet passengers who do choose Heathrow depart through the dedicated private jet terminal operated by Signature Flight Support. We recommend Luton as an alternative to Heathrow and can even provide helicopter transfers from Central London if time is of the essence.

London Gatwick Airport: Gatwick, like Heathrow takes commercial traffic as well as private aircraft and as a result is not always the recommended choice due to increased traffic on the tarmac and the potential for delays. Gatwick is located due South of London, and it can be convenient for short hops to the European continent.

London City Airport: London City is conveniently located in Central London, which makes it extremely efficient for private jet and turbo prop flights. The runway is relatively short, which restricts usage to turbo-prop and light jets, and the landing fees are higher than the outlying airports such as Luton or Farnborough

Southend Airport: Popular with Essex clientele; the Southend Airport underwent a major expansion leading up to the 2012 Olympics. For East Londoners the airport is convenient and offers far less congestion than Gatwick and Heathrow.

Biggin Hill Airport: The former Royal Air Force base offers South Londoners one of the best private airfields in the UK. Biggin Hill has low-cost landing fees and finding a slot for landings is never a problem. The airport also has three executive FBO’s on location so refueling is always quick and easy as well.

Luton Airport: London Luton Airport is the Great Britain’s most highly utilized private airport and one of the busiest in all of Europe. It is a great choice as ground transit time to Central London is faster than from some of the other outlying airports. London Luton offers a fantastic combination to the private jet London customer: A large fleet of private jets already based there; 24 hour access; cost effective landing fees; a choice of 3 private jet FBOs; a 25 minute train link into London (1 hour by car).

Farnborough Airport: If you’re looking to arrive in style, London Farnborough Airport is one of the most luxurious airports in the world. At one time slots were tough to come by at Farnborough, but the private strip is now able to offer an increasing number of plenty of availability. However, with longer ground transfers and higher landing fees than Luton, London Farnborough will likely stay as London’s second most popular private jet London airport.

London Stansted Airport: London Stansted Airport offers a choice of five private jet terminals (FBOs); 24 hour access; and good transport links. But it is less popular than it should be with London’s private jet users – perhaps because it is perceived as being further from London. In fact it is exactly the same distance away as Luton. With plenty of aircraft parking it is a popular choice for those using larger private jets, such as the BBJ, but for many others it remains under the radar.

London Oxford Airport: An alternative choice for West London is London Oxford Airport. It is further away from the city centre than some of London’s airports, but its proximity to the M40 motorway means it can rival them for driving times to West London. The airport is increasingly focused on the business aviation market and offers a dedicated terminal and very efficient service, promising a 5 minute turnaround for private jet flights.

London Cranfield Airport: A flexible VIP option for North London. Well-known for its flight school, London Cranfield also handles private jet flights. It a good choice for visitors looking to access the North of London, and is particularly popular during the Silverstone Grand Prix. Its runway can accommodate all sizes of private jet and, with no runway slots and airside access for cars, it offers flexibility and high levels of privacy.

London Blackbushe Airport: The most cost effective private jet London airport for short European hops. With a fleet of Cessna Mustangs based at London Blackbushe in Surrey, the airfield serves as a convenient and extremely cost-effective airfield for small jets – such as 4 passengers looking for a short European flight. Steeped in aviation history, the airfield has in the past been an important RAF base and served as a VIP entry point for London. These days, it provides an incredibly fast, efficient and low-cost operation for private jets, with exactly the same driving time as Farnborough.

London Fairoaks: Located in the Surrey suburbs, with a number of small prop planes based there, London Fairoaks offers the perfect airstrip for a small hops for our eastern London customers. Available aircraft are somewhat limited by the short strip, but it is also the ideal location to arrive by helicopter. Due to the limited traffic there, it is easy to get a departure slot, so rapid departure times are available at Fairoaks.

London Stapleford: Northeast of London you will find Stapleford Airport, which has a short airstrip, but allows prop planes 24 hour arrival and departures for clients interested in turbo prop and piston prop aircraft for shorter flights.